UGX 80,000shs per group
Group fee for half day but excludes entry fees.

Mabira forest boasts of 315 species of birds including the rare ones like the Nahan's francolin, Tit Hylia, Yellow and grey longbills, Purple-throated cuckoo shrikes, Illadopsises, Jameson's wattle eyes. 46% of Uganda's forest birds can easily be seen in Mabira than any other forest in Uganda. 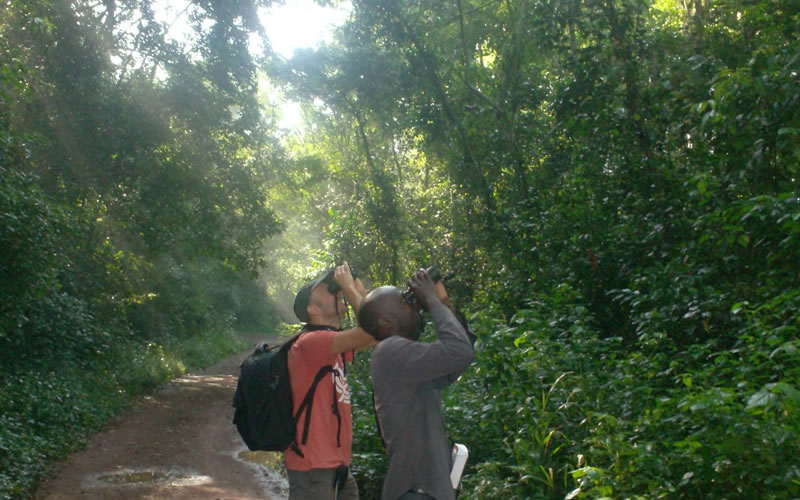 For many years big game has been the main attraction for the tourists in Africa, and it still is. However in recent years there has been a considerable increase in the number of people diversifying and pursuing more specialized safaris, bird watching is one of these. A potential for bird watching tours in Uganda was identified in the late 19th Century by Sir Frederick Jackson, former Governor of the Ugandan Protectorate, and keen ornithologist, who described Uganda as a "Hidden Eden.and a wonderland for birds"

For its size, approx 240,000 sq km, Uganda boasts more than any other country in Africa of her bird species. The current list has 1017 species and this figure constitutes more than 10% of the world's species. Uganda is situated in the overlap zone of the major ecological communities of West African Guinea/Congo Basin Rain Forest. It also spans the convergence of seven (7) of Africa's eighteen (18) floristic structure, encompassing more than any other country on the continent. Subsequently over half of Africa's bird species are found in Uganda, at the eastern most edge of their range. Uganda is thus, the only country in East Africa where these species can be found.

Uganda has a great variety of habitats, including the Afro-Alpine, montane forest, savanna, low land forests, wetlands and dry and semi arid desert: with elevation between 600m - 5000m.